Music and art converged every month as the faculty of Mason Gross Extension Division performed at Zimmerli Art Museum in a series of free weekend concerts.  The Music at the Museum series included works from Russia, the Far East and Latin America, among others.  Before each concert, the performers discussed the works and the concert’s theme. The series – in its third year – offered the community a way to experience a broad repertoire. The season began in October and ended Sunday, March 19. Our partnership with the museum is expected to continue in the fall with a new season of performances.

We spoke with Somarriba about her musical journey and working with Molina to feature the piece for Music at the Museum.  A native of Spain, Somarriba has been working with Spanish and Latin American music at a very young age. She has performed throughout the world from Carnegie Hall in New York City to the National Auditorium of Madrid.

Tell me a little about this music and this performance:

What was it like working with Patricio Molina, composer of Love?

He’s from Chile, so culturally we are close. We share the same musical interests in that regard. It was a very easy collaboration. When I called him, I gave him a blank page. I said the only thing I need is inspiration from Spain or Latin America. He did marvelous job and called me the next day saying it’s done. That really shows how clear his idea was even before writing the piece.

Have you ever done something like this that combines the more traditional and modern?

What is the most rewarding thing from concerts like this?

With concerts like this I always try to include some audience interaction. In this concert, the pre-concert talk is a way to explain to the audience a little bit about what they are going to listen to.This repertoire is very close to my heart so it is really an exciting opportunity and an honor to share the passion I have and enthusiasm.

Do you incorporate this repertoire in your students’ lessons?

Right now, I have several of my students playing Spanish or Latin American works. I think it’s an opportunity for them to experience something new. I am very thankful to be able to share my experience of this repertoire with my students. 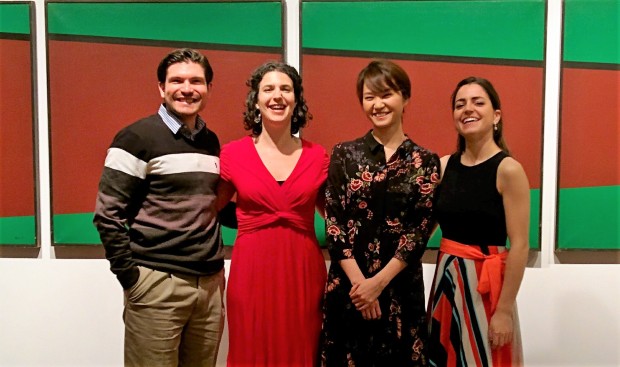 Chilean composer Patricio Molina with the performers following the concert.

< Previous Next >
+ Add your own event Eventbrite