Welcome to the first installment of our Weekly Faculty Interview Series. With this series, we hope to get to know more about the instructors and program directors who make all of our programs possible!

On top of running the Rutgers High School Musical Theater Academy, Alistair Williams is a performing arts professional with over ten years of experience. He has performed, choreographed, and directed at various venues throughout the tri-state area, such as the New Jersey Performing Arts Center and Paper Mill Playhouse. Williams is also the the executive director of Broadway Bodies NYC, a dance studio in NYC that specializes in teaching the choreography to pop songs, music videos and musicals. Williams’ work with Broadway Bodies has been featured in the New York Times, People, Advocate, Glamour, and many other periodicals and magazines.

TJ: What initially inspired you to go into the arts?
AW: I was (obnoxiously) born to perform. So, the transition into the arts was quite organic.

TJ: Was there a teacher who made an impact upon your development as an artist?  How did they impact your own work as a teacher?
AW: Haha. Yes, I’ve had my fair share of impactful teachers (both positive and negative). Initially, without much thought, I began emulating them. Sadly, I was incredibly ineffective. I didn’t feel grounded as a teacher until I began operating authentically.

TJ: What is the most rewarding part of teaching for you?
AW: Without question, seeing the students transform before my eyes. My instruction style is quite holistic. I’m passionate about investing in the student as a person and an artist. I love when students finally understand a lesson or concept, and are able to apply it beyond artistic work. I can literally see the light switch turn on. It’s powerful. 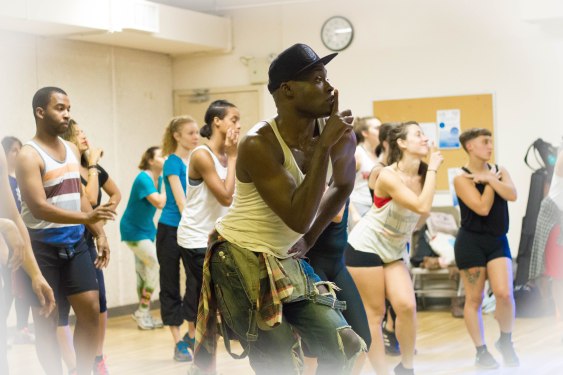 TJ: You’re stranded on an island and you are only allowed to listen to three cast albums for the rest of your time there. Which three cast albums do you choose and why?
AW: Hamilton, In The Heights…maybe The Lion King or Once On This Island.

TJ: If you could perform with any actor or dancer from the past or present, who would it be and why?
AW: Lin Manuel Miranda. I’m obsessed with his work, and I love the doors he has open for people of color.

TJ: Do you have any advice for young artists looking to go into musical theater? What is something they should know about the acting industry?
AW: Two things: 1. Be exceptional, and doors will open. Natural talent is just the foundation. Skill development will help you soar. 2. You are a package not a feature. Very often, new performers rely on one attribute to define themselves by. However, the musical theater industry demands a package of excellence.

Thanks so much, Alistair! If you wish to see the work Alistair does with the Extension Division, then check out the Rutgers High School Musical Theater Academy Showcase this Friday, January 22, and Saturday, January 23 at 8 PM in the Philip J. Levin Theater at the Mason Gross School of the Arts! Tickets can be found atmgedrhsmta.wordpress.com!

< Previous Next >
+ Add your own event Eventbrite